Radhakrishna ji was a dedicated Gandhian who did not disdain those with eclectic views. He was a genial companion and warm friend. He was Secretary of the Gandhi Peace Foundation during the Emergency period. He was deeply involved in social development by exploring alternative paths to development and social progress.

He was a votary of JP's concept of Total Revolution and lok samitis, bhoodan and gramdan, khadi and village industries, antyodaya, decentralized rural development and conflict resolution. He was forever willing to experiment and tread new paths and it is this aspect of his philosophy and approach to the problems of the day. He drew inspiration from Gandhi’s life and work in charting his future course of action.

The labourer must get a fair deal, of course; but equally, the labourer must be worthy of his hire. Concepts such as trusteeship and safety nets need to be built for specific cases of industrial growth, technological change and globalization. Radhakrishnaji tried to probe Gandhian frontiers. There are vital issues of fraternity, naxalism, alienation, tribal uplift, education, gender justice, the environment, employment and so on that cry for attention. He encouraged people to think deeply enough or holistically on such topics and their inter-linkages and translate the ideas into programmes. 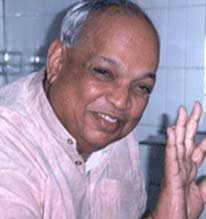